Camilla Sparksss brings her energetic live show to the UK for special dates this November. 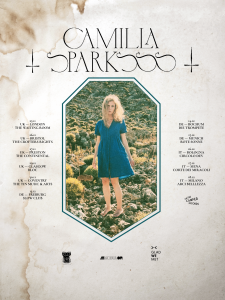 Barbara Lehnhoff, artistically know as Camilla Sparksss is a Swiss Canadian electro punk musician and visual artist. She is also co-founder of the post-punk band Peter Kernel. She was born at -30 degrees in Kenora Ontario, Canada. Yes, she had a pet bear as a child and yes, her father flew a float plane.

Camilla Sparksss is bringing her trademark energetic live performance, which mixes her own samples pressed on dubplate (vinyl), combined with thick synthesisers and cutting vocals, to the UK this November for five special fully analog shows.

On her unique performance style, Barbara said, “As an electronic musician coming from a punk background my biggest challenge was to create a physical live experience, so by pressing my samples on dub plates I can play them as “real” instruments, the turntables become my guitars”.

Alongside the tour dates, November 2022 will also give light to ‘Mare Sparksss’, two singles written in collaboration with Mike Mare (DALEK) entitled ‘Drifting’ and ‘Goo’. The singles will be released via On The Camper Records on limited edition 7” vinyl and on all digital platforms.

Camilla Sparksss’ music is an instinctive mixture of 80’s dark wave experimental electronic music performed alongside a lo-fi dancer on stage. Her debut album ‘For You The Wild’ was released in 2014 and she toured as opening act for Jon Spencer Blues Explosion on their 2014 European Tour.

In 2019 she released her second album entitled ‘Brutal’, which is a mixture of experimental, lo-fi electronic pop, and melodic collages of a wide range of genres, performed with turntables, fat synthesisers and vocals. ‘Brutal’ was followed in 2020 by a full remix album entitled ‘Brutal Remix’, containing sixteen remixes by a variety of different artists such as French beat maker Fakear, electro clash artist Rebeka Warrior, experimental jazz drummer Kevin Shea and many more.

In 2021 Camilla Sparksss worked with Alec Ounsworth (Clap Your Hands Say Yeah) and Eva Geist to compose a one hour live performance for Ypsig Rock festival in Sicily, later to release a single entitled ‘The Sound Of This Place’ in July 2022. The same year, she composed the music and performed live for the theatre piece ‘Der Besuch der Alten Dame’ by Friedrich Durrenmatt, staged by Nicolas Stemann for the Schauspielspielhaus Zurich Switzerland.

In 2016 she was nominated for the Swiss Music Prize with her post punk band Peter Kernel. She is also co-founder of Swiss independent Label On The Camper Records, four time winner of the Best Swiss Indipendent Label by Migros Cultur Zurich.

Come experience Camilla Sparksss on tour in the UK as follows: 25.11 | London – The Waiting Room